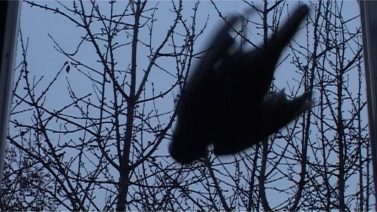 Thursday, June 14
Panel session as part of the exhibition.

The exhibition project „Trace the Tweet“ by artists /curators Gertrude Moser Wagner and Claudia Mongini draws patterns of interference between scientific and artistic practices by following the vectorial traces of bird paths, both in terms of straightforward content and as an introductory idea for epistemic translation.

The experimentation of different connections between speech and sensation opens up new potentials for escaping reductionist impositions culminating in the formation of neoliberal subjectivity. And in turn, novel acts of perception and expression could lead towards the creation of more intensive eco-and ethological feelings and consequently into a diverse unfolding of human and nonhuman relational patterns.

Project supported in cooperation with the Austrian Cultural Forum in Prague .

Information about the curator’s concepts and proposed artists projects: 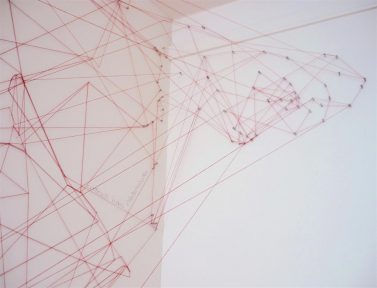 The tweet, a particular kind of bird vocalization, not yet articulated into the complex pattern of a song, introduces the theme of the show by the middle: different artistic positions deal with scientific material centered around the generics of “songs” and “birds”. But the tweet does not imply only a content, but also a method of approaching different epistemic dimensions from the point of view of their intrinsic complexity. An encounter between “foreign” disciplines, but also diverse actors, necessitates that both parts take a step back from their language and the specificity of the problems, and start tweeting, I.e. unravel their daily modes of being and of expression and experiment with different patterns, in order not only to produce a different level of understandability, but also to set the basis for diverse conditions of artistic creation. In this sense, the tweet is understood as a synthesizer between modes of expression which are distant to each other; along with the musical instrument which generates new timbres by combination of different sounds, the tweet would draw a synthesis between the diverse domains of scientific and artistic expression which are at stake in the show.

Gertrude Moser-Wagner’s work has been dealing with “birds” for many years. She has developed the issue in a series of projects, made both in collaboration with ornithologists, mathematicians social and political scientists – but also in terms of critical examination boundaries between different sets of scientific and artistic practices. In 2009 Moser-Wagner has discovered the little south Italian island Ventotene which is not only a resting ground for birds migrating from Northern Europe to South Africa but also, since the time of the roman empire, an island of banishment. There, the exiled antifascist Altiero Spinelli formulated, together with his comrades, the “Manifesto for Ventotene” containing the core ideas of European Union. In her Project Zugunruhe, developed between exhibitions in Italy and Vienna, Moser-Wagner brings together the two aspects, of birds – and transnational migration. This project continued in Belgrade, in a collaboration with the artist and mathematician Marica Radojčič. 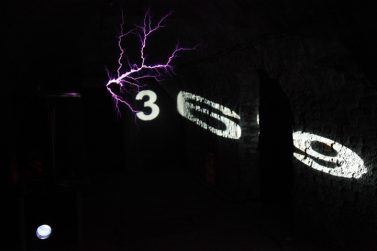 Many time repeated dream during my childhood – dream of levitation (other people have had similar dream I know, but it has always its personal features and characteristics)…
Byzantine thought was very complex comprehending philosophy, metaphysics, aesthetics, art, as well as the mystical praxis of hierarchy (personal and collective one – in liturgical act). Approaching to gnosis as highest step of knowledge was the main aim in the process of following the path of hierarchy. The whole theory was founded on the antinomian basis for it was accepted as postulate that the truth (logos) cannot be approached by logical statements. The gnosis can be touched (never reached) only on emotional-aesthetical level, in the moment of personal enlightenment. Mystical praxis was a kind of living, the way of flying on the wings of light. 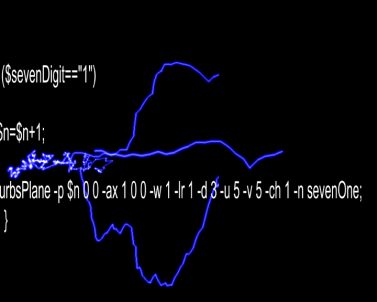 In recent years, Claudia Mongini’s work has been examining the tweet in terms of theoretical transfer between different knowledge areas. Her perspective deals both with the analysis of specific conditions of interference between current scientific and artistic practices, as well as the inquiry of their transformational conditions. Her approach is based on the concept of individuation as developed by the French epistemologist Gilbert Simondon. Simondon understands individuation as a process describing being from the point of view of its genesis, which is in opposition to examining development backwards, out of manifest conditions of existence. This perspective does not anymore entail individuated reality at the core of the attention, but rather focuses onto the process of its relational emergence. Individuation arises from a material plane of relations made up of differing potentials of energy, which is the ‘pre-individual’ state. In this sense, individuation is always conceived in terms of a partial and local resolution of these disparate energetic/material fields, resolution which never exhausts its primary possibilities and therefore retains the potential for further development.

In the exhibition work “Red thread” (wall installation, materials: red wool, nails pencil sketches) Claudia Mongini will follow the tracings of a mathematical model deriving from Chaos theory which has been at the basis of her former artistic activity. The series of numbers – i.e. the outcome of the algorithm – will not be translated to aesthetics in terms of visual spatial coordinates, but will constitute a referential pattern to be further developed in the gallery space..

Linda Čihařová‘s works are mostly related to enviroment, natural powers, scientific studies or systems. Applying one system on the other helps her to find interesting features and new points of view. Her recent work was inspired by a residency in New Zeland, where the perception of nature and the being in natura surrounding was structuring er time. The installation „Long Journey“ consists of a set of small sculptures, depicting bird – people: people arranged in a formation similar to birds flying long journeys. These bird – people flocks can lead
towards rethinking human class hierarchy. I wonder if bird behavior could affect the dynamics of human social groupings and how new forms of mutual cooperation would look like. 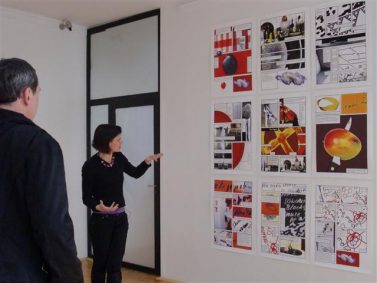 In 2009/2010 artist Yvonne Dröge Wendel (NL/D) assembled nine collaborative meetings of theorists, designers, artists, archeologists, anthropologists and scientists in her studio to discuss the ontological, epistemological and aesthetic aspects of ‘objects.’ Each meeting produced a conceptual object she would later actualise. The Object One strip is a diagrammatic mapping of the initial six-hour conversation between Willem van Weelden, Klaas Kuitenbrouwer, Sher Doruff and Yvonne Dröge Wendel.

The strip/collage format takes advantage of the imaginary potential of the space between image/text renderings of the things ‘gathered’ in the studio space of the conversation that affected and where affected by the movement of thought that day. The relational dynamics between the discursive and non-discursive ‘matters’ of that discussion play out in a diagrammatic translation that traces an activating process as artistic practice.

“The path wound up to a deeply wooded hilltop where I was expecting bird songs, maybe even a short visual cue. But my concept was too lose, I had failed to take advices from some of the older ones in the village behind me, and to leave my artistic viewpoints solely to the camera? No intervention between ON and OFF besides the time span which I believe would be still decided by myself? I know my ways are determined by known and unknown circumstances, I move through a haze, enter a labyrinth not knowing how I could get out soon, I shouldn’t turn back, something drives me forward along the trajectory of the bird now starting to fly over my head. Do I find the in-between by the theoretical established flight line of this bird and my naive astonishment at his shiny coloured feathers? There is no free will.”
Hermann Hendrich 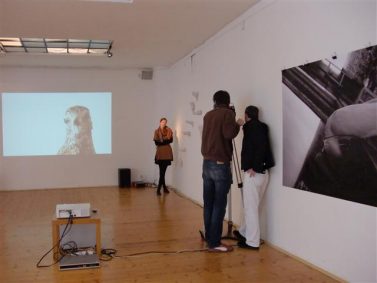 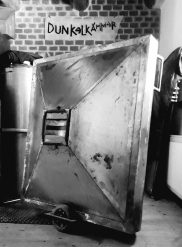