In the footsteps of Veza Canetti

Mean husbands, despairing servant girls, lecherous café owners and a snapping dog: these are just some of the protagonists who breathe life into Veza Canetti’s novel “Yellow Street”. 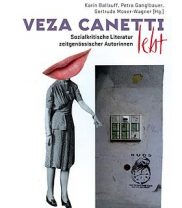 Canetti’s milieu study is not an easy read: behind the elegant façade of Ferdinandstrasse – the street that served as a model for the novel – avarice, envy, bitterness and madness are at work. The language used by the author in her descriptions is terse and sharp and perhaps for that reason cuts so deep. Once you have discovered Veza Canetti’s work, you won’t be able to forget it so easily. And that’s a good thing.

For too long the author and English translator lived in the shadow of her famous husband – the Nobel Prize winner Elias Canetti, whom she regularly assisted in his work. She published her own work during her lifetime only in newspapers and it was not until 1990 that her novel “Yellow Street” came out posthumously – although extracts had appeared between the wars in “Arbeiterzeitung” – causing a minor sensation in literary circles.

From bookbinding to the library

In spite of the relative success of her book, the author is still largely unknown. Much about her life is unclear or obscure. “The truth is buried in there somewhere,” runs a sentence in “Yellow Street”, a quotation that could be applied both to the work and to the author’s life. Since early May there has been a commemorative plaque on the wall of Ferdinandstrasse 29, where Venetiana Taubner-Calderon, Canetti’s maiden name, used to live before moving to Grinzing and then emigrating with her husband to London in 1938/39. The initiative comes from the project group “Vezalebt” led by the artist Gertrude Moser-Wagner, one of several initiatives by the team in the last few years. The project also includes an exhibition tour with various works by the artist relating to Veza Canetti (due to the 50th anniversary of her death) at different sites in Leopoldstadt – an ideal form of presentation for a writer who wrote about her own surroundings in her works. The exhibition runs until 12 June and uses everyday locations, from the bookbinder Waniek with drawings by Li Cunqing and the architect’s studio Balogh with photographs by Anna-Lisa Schöffel and pictures by Zsuzsanna Balla, to the ESRA psychosocial centre for Holocaust victims. The latter currently features pictures by the young Viennese photographer Bernd Bogensberger, who visited the apartment in Grinzing where Veza lived with Elias Canetti after moving from Ferdinandstrasse. Visitors must first report to the concierge, however, before being able to view the lyrical pictures of the abandoned interior and exterior rooms.

Admission to the local library in Zirkusgasse, where Monika Lederbauer has an installation on women in the shadows, is not as complicated. Visitors can browse a selection of books with works by the author, including an anthology published by Vezalebt. A wonderful opportunity to find out more about the “Yellow Street characters” can be found in an installation of the same name [“Typen der gelben Strasse”] by the Viennese artist Eva Wassertheurer. For the Vezalebt project she knitted the characters with wool. An integrated stop-motion film can also be found in the display window of the arcade at Praterstrasse 42, which is not only one of the most entertaining contributions but also one of the most interesting and committed.

Other contributors to the project include Isabel Czerwenka-Wenkstetten with a photographic documentation of her performance “Woman as nurturer” and the Italian artist Carla Sanguineti, who was invited with her mirror installation “Woman as monster” to help celebrate the anniversary of Veza Canetti. In this installation visitors see themselves – as monsters, women in the shadows, or creative artists. Perhaps something of all of these. Like everyone else, Veza Canetti was also a complex personality with her own secrets. The important thing today is to ask ourselves what she means to us now, a question that arises as soon as we start to read. And one thing is certain: once you have discovered Veza Canetti, you will be hooked.